If You Have Bleeding Gums 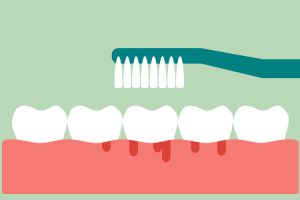 Twice-a-day brushings are the first line of defense against cavities, tooth decay, and periodontal (gum) disease. And since brushing is usually a routine and stress-free experience, it can be pretty worrying when you see unexpected bleeding. Remember that you aren’t in immediate danger, so there is no need to panic. However (although there are several common causes), bleeding gums is never “normal,” and a dentist should investigate the underlying cause.

Brushing with too much force can irritate and injure sensitive gum tissue. That’s why we always recommend using a soft-bristled brush. Additionally, you should angle the bristles away from the gums when brushing. Improper flossing can also risk injury, so always work the floss laterally and gently. Never force the floss downward toward your gums.

Some of the early signs of malnutrition include bleeding gums. If your diet does not contain enough fresh fruits and vegetables, you may miss out on some of the essential vitamins and minerals needed for a healthy mouth. (In particular, vitamin C is one of the most crucial to oral health and a deficiency causes the condition known as scurvy.)

In advanced cases of malnutrition, gums can recede, and tooth loss becomes a real danger. Luckily, in the early stages, when gums first begin to bleed, the condition is entirely reversible by improving your diet or incorporating supplements of vitamins.

Plaque can accumulate on teeth below the gum line, making it impossible to remove yourself at home. So, though teeth may appear clean at first glance, there may be a deeper problem (especially if it’s been a long time since your last cleaning at the dentist’s office.) In these instances, the surrounding gum tissue often becomes irritated or infected, leading to bleeding gums. The fix is a “deep cleaning” in which we remove the stubborn build-up from below the gum line.

When periodontal disease is present, whether it’s from poor oral hygiene or a tooth infection that has spread to the gums, it’s vital to address the issue. Our periodontal therapies have positive outcomes in treating a variety of cases. However, success also requires a commitment on your end for better at-home care and attending the recommended appointments. Overall, the outlook is good, and there’s no reason your mouth cannot return to perfect health!